Disclosure: This post includes affiliate marketing links. This means that I may earn a commission at no additional charge to you if the products are purchased. Check out my disclaimer here.

Are you looking for a unique experience at a Walt Disney World Resort?  Something different and memorable?   Disney’s Treehouse Villas may be your answer.

The Treehouse Villas are apart of the Saratoga Springs Resort; however, they feel completely separate (both literally and figuratively).  They are comfortable, serene, spacious, and offer a very rustic (but luxurious) feel.

We wanted to get away but not go too far, and we didn’t really want to be in the midst of a lot of people with the whole pandemic going on so this was the perfect solution.  Staying at the villas, we had our own little space and were able to hang out.  It was honestly like finding a cabin in the Carolinas.  The area is secluded and wooded, and it creates a relaxing atmosphere that definitely feels like a retreat.   This year has been insane and we needed a break which this gave us and it added a little Disney magic with hidden Mickeys.

The villas include a kitchen, dishwasher, washer & dryer, 2 bathrooms, 3 bedrooms, living room area, dining area, as well as a deck with table and chairs.  The kitchen has plates, silverware, a few pots and pans, and drinkware.  There are dishwasher soap packets as well as liquid soap for dishes, and liquid detergent for the clothes in the washer/dryer area.

While we were only there for two nights, when you have kids it’s amazing at how handy this in-room washer and dryer can be.

Once we got settled in, we decided to take a trip to Publix to pick up some food. We picked up some breakfast items, stuff for lunch, and dinner for the next night.   It’s crazy how complicated dinner can feel when you don’t have all of your normal condiments and spices that you use at home.  We figured the easiest thing to do would be tacos, so we went with that.

Sidenote: Publix had a ton of Disney merchandise, which definitely saves some money buying a plush there rather than the gift shop, especially if you do “Tinkerbell” gifts for the kids. It’s also a great place to pick up Disney-themed ponchos if you’ve forgotten your ponchos at home this is a way cheaper option than buying one in the parks.

We made pancakes and bacon the next morning, then went to the pool at the Saratoga Springs Resort.  It was nice because there weren’t many people there at all.  For lunch, we went back to the treehouse and made some sandwiches.  Afterward, we decided to go to Disney Springs for a little bit.  It was hot and while it wasn’t packed, it was busy so after about an hour we headed back to the treehouse.  There are two big pools at the Saratoga Springs with waterslides so the kids wanted to go and check out the second one.   They had a blast, and again because it was relatively empty, they were able to have a lot of fun on the slide.

That night we made tacos for dinner.  They were super simple, black beans, tortilla chips, and ground beef- but they were delicious and dubbed by the kids “Treehouse Tacos.”  Now, whenever we do tacos at home that are ground beef the kids get excited and still call them treehouse tacos.

It was nice to go and sit out on the deck in the early morning and in the evening as well.  It had such a peaceful feeling to it.  We had been stuck in the house for months and were desperately in need of a change of scenery. 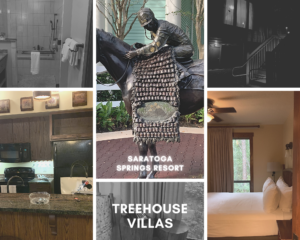 It was relaxing and enjoyable.  The tub in the main bedroom was amazing.  The kids had a blast in it.

We also checked out the Old Key West resort which definitely has a Key West laid back feel to it and we had lunch at Olivia’s Café.  It’s a relaxing and casual table service restaurant.  We tried the Southernmost Buttermilk Chicken, which was delicious, and for dessert had the Key Lime Pie tart.   The kids got the Southernmost Buttermilk Chicken Strips which they loved. For dessert, they got a sundae however my son decided he liked the key lime tart much better.

The Treehouse Villas are a Disney Vacation Club property (DVC) but as with other DVC properties, you can sometimes find them available for non-members.  You may be able to buy DVC points to be able to check them out as well. I’ve not used it personally, but I have heard good things about David’s Vacation Club Rentals which allows you to rent points.

Who are the Treehouse Villas not for?

If you want to spend your time at the parks, then really, it would probably feel like a waste.

While I saw resort buses coming through often in the evenings, it’s been said that they are spotty throughout the day so if you plan on staying here it’s best to have your own car.

It is not close to your regular resort amenities, which for some is a deal-breaker (and understandably so).  The treehouses are geared towards people wanting to have that serene retreat away from it all.

If you’re wanting a rustic stay but the Treehouse Villas don’t offer the convenience needed you can also check out the Wilderness Lodge.

Save* 20% On Select Disney Gifts at PreciousMoments.com

Stay Up To Date

Any cookies that may not be particularly necessary for the website to function and is used specifically to collect user personal data via analytics, ads, other embedded contents are termed as non-necessary cookies. It is mandatory to procure user consent prior to running these cookies on your website.